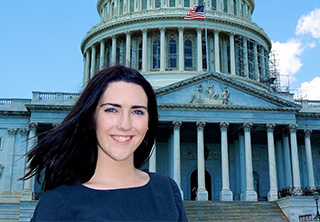 Katie: Inspiring the Next Generation of World Leaders
"The whole globe can change for the better if enough young people are inspired and energized."
We spoke with Katie via email in April and May 2016.

Diversity and community service are integral components of Katie’s life. As a trilingual global citizen, she has served as an exchange student in Denmark, the Czech Republic, and Spain. To promote diversity and social inclusion, she founded Project Next Generation, an international youth civics organization. Katie, 18 years old, has mentored hundreds of middle schoolers across the globe and has served as a United Nations (U.N.) delegate in New York City on International Youth Day. She aspires to serve as a diplomat or United States Senator. Below, Katie reflects on her leadership experience and shares her perspective on what it takes to meaningfully engage young people as civic leaders and volunteers.

What is Project Next Generation?

In 2013, I founded Project Next Generation, an international youth empowerment organization. The mission of Project Next Generation is to engage and inspire the next generation of young global leaders to effect positive change worldwide. I use free social science workshops addressing volunteerism, leadership, diplomacy and other topics to teach middle school students to be socially conscious leaders, in the hope of promoting global citizenship for generations to come.

Why did you to start Project Next Generation?

I started Project Next Generation because I wanted to revitalize civics education. I wanted to invest in my generation by promoting diversity and a global outlook in my community.

What have you learned from leading Project Next Generation?

I have learned that youth are the greatest resource in the world. The whole globe can change for the better if enough young people are inspired and energized.

My biggest advice to young people is that you are never “too young” to create change. In fact, our blossoming brains are biologically engineered to change the world. Young people should take on leadership roles and use their voices for the causes that affect them the most. While leading, take the time to listen to different perspectives and learn what shapes others’ worlds.

What’s next for Project Next Generation?

ProjectNextGeneration.org is currently expanding. I am leading interactive and tuition-free, six-week-long summer camps on Cape Cod for middle school students. I will continue to grow my organization in New York City this fall as I begin my freshman year at Columbia University. And, as an intern with United States Senator Elizabeth Warren, I will continue to support young people.